MAH NA MAH NA: a review of "The Muppets" 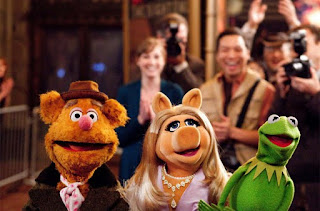 It suddenly dawned upon me that I have never known a world where The Muppets have not existed.

From my earliest years watching “Sesame Street,” to my later childhood and pre-adolescent years watching “The Muppet Show,” seeing their first two motion pictures “The Muppet Movie” (1979) and “The Great Muppet Caper” (1981), plus more subversive appearances upon “Saturday Night Live” and most certainly, the major influence of a diminutive Jedi Knight in the “Star Wars” universe, the vision and artistry of Jim Henson and chief Muppeteer Frank Oz remained a constant and welcome presence in my development. I adored their irrepressible antics, their unmistakable madness, their endlessly inventive word play and slapstick and I would gather that perhaps what appealed to me most of all, although I don’t think I would have picked up upon this at tat time, was their undying sense of humanity. It’s strange, but even as an adult and knowing more about the actual behind the scenes mechanics of how these characters are brought to life, Miss Piggy, Fozzie Bear, Gonzo, and especially Kermit The Frog, still feel so very real to me. They are trusted friends who will stick by you to the bitter end simply because that’s just what friends do.

As I grew older and was not actively watching anything related to The Muppets, I was always pleased to see that they remained a strong influence in pop culture for a time. It was comforting to know that Kermit and his friends were somehow still there, their gracious and hysterical influence was still in the atmosphere, especially after the untimely passing of Jim Henson in 1990. But, over time, I found something a tad unsettling.

In my life as a preschool teacher, I have often come up with silly nicknames of one sort or another to address my young students. Often times, I have even addressed them as “Muppets” because their wide eyes, grand smiles and boundless energy often reminds me of Muppet characters racing around a room, waving their appendages in hilarity. When I arrived at a year recently when I addressed the children as Muppets, they all looked at me blankly. It was obvious that my students did not have any idea of who or what Muppets could be, and believe it or not, it just saddened me. While I have known of a small smattering of families who have checked out Muppet videos from the library or local video stores in recent years, I just could not fathom a world where The Muppets had fallen so out of favor that a new generation of children would grow up not knowing their unique and irreplaceable brand of magic.

I just know that Jason Segal must have been feeling the exact same way as I, since he and writing partner Nicholas Stoller (who co-created the terrific 2009 R rated romantic comedy “Forgetting Sarah Marshall”), have seemingly willed the world of these characters back into existence with the wonderful new film “The Muppets.” This bright, bouncy, hugely enjoyable new film not only marks the grand return of Kermit and friends to the big screen, it is an experience which serves as an obvious labor of love for Jason Segal, as that very love shines through every frame of this movie from beginning to end.

As “The Muppets” opens, we are introduced to Gary (Jason Segal) and his brother Walter, a Muppet, who has increasingly begun to feel out of place in the human world of Smalltown U.S.A. After watching vintage episodes of “The Muppet Show” as youths, Walter soon becomes the biggest Muppet fan of them all, especially as he senses a kinship with this odd collective of singing, dancing, always joking and jovial characters. Walter is blessed with a major surprise from Gary, as the twosome plus Gary’s longtime girlfriend Mary (the adorable Amy Adams), plan to take a trip to Los Angeles, promising Walter that they will indeed make a stop at the legendary Muppet Studios for a tour.

Upon arriving, the trio is stunned to find the Muppet Studios in a dilapidated state and that the famed Muppet crew has all disbanded, has not performed together in years and are currently living out their days in relative obscurity. To make matters even worse, Walter overhears the fiendish plans of oil tycoon Tex Richmond (a terrific Chris Cooper), who is determined to tear down the Muppet Studios to drill for oil. Walter, with the aid of Gary and Mary, becomes determined to locate and re-group all The Muppets to hold a telethon. The goal is to raise the necessary 10 million dollars (!) to buy back their studio, forever keeping it away from Richmond’s greedy hands as well as reminding the world at large just how much better life can be with Muppets in it.

“The Muppets” is pure entertainment at its best and accomplishes the tricky feat of updating themselves while also possessing all of the qualities that made the world fall in love with them in the first place. The film, as energetically directed by James Bobin, features glorious musical numbers combined with gentle spirits, healthy doses of self-reflexive, subversive humor, non-sequiturs, wild slapstick, celebrity cameos (none of which I will reveal here) and a heart as wide as the open sky. There is true magic at work with these characters and I appreciate that Segal and Stoller created this film without any need to alter any perceptions about who these characters are and how they function within the world. And it struck me, so confounding yet so happily, over and again, at how much I was moved to see Kermit and friends all one more time. These characters are treasured old friends and I found myself honestly caring about what would happen to them in a world that seems to not care about them anymore.

That particular brand of melancholy was a very nice touch that Segal and Stoller kept intact for this film as that bittersweet spirit has existed at the heart of these characters ever since Kermit sang “It’s Not Easy Bein’ Green” so very long ago. For all of the sunshine on display, the filmmakers have not forgotten to ensure those dark clouds are present here and there, making for moments that were purely touching and heart tugging. Walter’s search for his sense of purpose and place in the world is a quality that faces all of us, thus making this new Muppet character instantly endearing. I even have to say that the love story between Gary and Mary also provides some very sweet moments as they are reaching their 10th anniversary together and Mary is increasingly troubled by Gary’s devotion to Walter at her expense. For that matter, the love story between Kermit and Miss Piggy held surprisingly mature poignancy as well. Yet, it was during a sequence where Kermit walks through his lonely mansion surrounded by images of his once glorious and beloved past and sings a sad song entitled “Pictures In My Head” that I felt the film to be so emotionally resonant that I had to remind myself and laugh to myself that this singing, talking frog is not even real. But then again, Kermit is nothing BUT real and that realness is what binds our love and affection towards him and all of his friends.

But, do not get me wrong. “The Muppets” is by no means a drama and it provides huge, honest laughter throughout. With a storyline lifted from classic Mickey Rooney movies as well as the “we’re putting the band back together” element from John Landis’ “The Blues Brothers” (1980), “The Muppets” is a movie that knows all along that it is a movie and it has a great time playing with that knowledge with the audience. The filmmakers address the increased irrelevancy of The Muppets, plus a certain soullessness of current children’s entertainment head on within the plot making the telethon sequence, which is essentially a big screen version of the classic television show, that much more meaningful. I’m telling you dear readers, when Kermit began to strum his banjo once again to perform “The Rainbow Connection,” my heart filled with supreme joy. And it is that special brand of joy that would be missing in a world without Muppets, a world Jason Segal so passionately never wishes to see and a world I, just as passionately, never wish for any child to have.

Look dear readers, I know that a certain computer generated, squeaky voiced chipmunk and his brothers are soon to arrive again in the multiplexes for the holiday season and will indeed rake in a fortune at the box office. Fine. Go see them. I cannot stop you even if I wanted to. But, please, for those of you that are parents, do not complain about the lack of quality family film material especially as the theaters are also featuring Martin Scorsese’s extraordinary “Hugo,” Cameron Crowe’s beautiful “We Bought A Zoo” (opening at Christmas) and now, “The Muppets” as well.

“The Muppets” is a film filled to the brim with hilarity, artistry and love. It is pure, honest entertainment that wants nothing more than to fill your heart and place a goofy smile upon your collective faces, a feat this film accomplishes splendidly. Yet, it was at first jarring to not hear the familiar voices of Jim Henson and the retired Frank Oz at play but that disappointment faded quickly as what this current breed of Muppeteers have done is to keep the souls of Kermit and company fully alive. In short and utilizing these characters’ special brand of vernacular, “The Muppets” is Muppetational entertainment meant for absolutely everyone.

Returning to my classroom for a brief moment, just last week I began to sing the classic “Mah Na Mah Na” song and one of my young charges opened his eyes widely, formed a terrifically beaming smile and exclaimed, “That’s The Muppets!!!!!” At that point, my face lit up into a terrifically beaming smile and I replied to him, “Yes it is, my boy! Yes it is!!” It charmed me to think that possibly a new generation would finally know what so many generations have known so deeply: That a world without Muppets is not a world any of us would ever wish to see.

Welcome back and long may you run!!!!!

Posted by Scott Collins at 2:31 PM