HAIL CAESAR!: a review of "Rise Of The Planet Of The Apes" 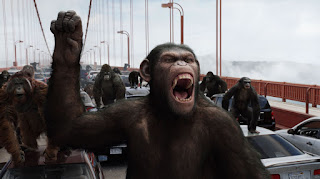 I have to say that I could easily live the remainder of my blessed life without ever seeing even one more entry in the “Planet Of The Apes” series.

Throughout my life watching movies, I have to admit to having never had that much of an attraction towards the “Planet Of the Apes” series. Even throughout my science fiction obsessed childhood (which consisted of a steady diet of “Star Trek” reruns plus “Flash Gordon” and “Buck Rogers” serials), especially during the days before “Star Wars” completely changed the game in 1977, the sights of walking, talking, horse riding apes with rifles did not posses a draw for me. I actually never even saw the films until the 1990’s, when a chance cable television viewing of the 1968 classic Charlton Heston starring vehicle impressed me enough to quickly race out and rent the remaining four films in the series. While the quintet of films were more than a bit messy, I was surprised and impressed at how dystopian, bleak, violent and even socially relevant those films actually were in regards to their allegorical plays on race relations, the civil rights movement, the ecology and even nuclear holocaust (the second film in the G rated series actually concluded with the destruction of Earth of all things).

Because of that quintet, my interest was piqued just enough to get myself excited about Director Tim Burton’s 2001 “re-imagining” starring Mark Wahlberg and without going into it terribly much, that film was such a massive, misguided letdown that it truly soured any potential interest I had in ever watching another “Apes” experience ever again.

But then, this past summer, the suits in Hollywood decided that another try with the “Apes” franchise was necessary for some reason unbeknownst to me. I have to admit to being surprised not only with the massive box office take the film received during its late summer release, but also with the high critical praise it received as well. Now, dear readers, after having seen it myself, I do have to make the announcement that, while not perfect, “Rise Of The Planet Of The Apes” was more than a bit of a surprise. It is a thoughtful, imaginative, inventive, fast-paced series reboot…or rather, re-imagining that cleverly accomplishes the feat of appealing to fans of the original films while simultaneously making the experience completely accessible to novices.

“Rise Of The Planet Of The Apes” opens with the capture of five primates from the jungle and their transport to the San Francisco based Gen-Sys biotechnology laboratories where Dr. Will Rodman (James Franco) is deeply involved with a potentially revolutionary treatment that may potentially cure Alzheimer’s disease.

Utilizing the apes as test subjects for his new formula, it is soon discovered that through mutating the chimpanzees’ genetic makeup, the original level of the animals’ intelligence is dramatically enhanced. After a chimpanzee nicknamed “Bright Eyes,” Will’s most successful test subject, goes on a rampage in the attempt to protect her then (unknown to the scientists) unborn chimp, Will’s boss and financial benefactor Steven Jacobs (David Oyelowo), orders the complete euthanization of Bright Eyes and the remaining chimpanzees. As Will’s friend and chimp handler Robert Franklin (Tyler Labine) is unable to kill the baby chimp, Will reluctantly takes the chimp home for temporary safekeeping as well as for therapeutic companionship for Charles (a hammy John Lithgow), Will’s Alzheimer’s afflicted Father.

Over the course of the following years, Will feverishly continues his scientific research which includes secretly testing his new formula upon his Father, an act which does indeed cure—albeit temporarily--his Alzheimer’s disease. The chimp, now named Caesar, has become a deeply loved member of Will’s household. Caesar, having inherited his Mother’s hyper-intelligence, yearns for larger surroundings to explore outside of the home, which is granted through beloved visits to the Redwood forests. Most importantly, Caesar has begun the painful process of examining the purpose of his life’s existence. As a cherished family member, although within a human family, he questions if he is merely a “pet” or meant for something much larger.

After one too many negative encounters with their cantankerous airline pilot neighbor, Caesar is forcibly taken from Will and brought to the San Bruno Primate Facility, a dank, dungeon like facility run by the icy John Landon (Brian Cox). Even worse, all of the animals are treated viciously by Landon’s sadistic son Dodge (a thoroughly hiss worthy Tom Felton from the “Harry Potter” film series).

While Will and his girlfriend Caroline Aranha (Frieda Pinto), a San Francisco Zoo primate specialist desperately try to free Caesar from the Primate facility, Caesar begins his life altering journey as this genetically enhanced primate is assimilated for the first time with members of his own species. As he struggles to claim his dominant platform within the group, Caesar eventually organizes the imprisoned apes, becomes leader of his species, and begins an uprising than is nothing short of revolutionary.

When it comes to the concept of “re-imagining” a classic film series, “Rise Of The Planet Of The Apes” briskly and firmly shows how that feat is to be accomplished correctly. The film functions as a loose remake of 1972’s “Conquest Of The Planet Of The Apes,” the fourth film in the original series, while also working tremendously well as an origin story. Director Rupert Wyatt and his screenwriters Rick Jaffa and Amanda Silver have ingeniously established the groundwork for a new epic trilogy that cleverly is disconnected from the original series’ timeline by moving all of the action to present day. And yet for those for whom the original series is beloved, the filmmakers have gathered more than enough visual and dialogue references that honor all of the familiar material handsomely.

Wyatt mounts a lean, clear expositional tale with a healthy dose of humor that allows the film to never become ridiculously ponderous while also keeping a firm sense of pathos regarding Caesar’s existential crisis and the film’s themes of humankind’s destructive hubris.

In fact, the most compelling theme of this film to me was essentially the found in the old proverb, “The road to Hell is paved with good intentions.” Dr. Will Rodman is not evil by any means whatsoever. He is a good man, filled with good intentions as he attempts to utilize his intelligence and scientific skills for the betterment of humanity. Unfortunately, his single-minded quest contributes to unethical and dangerous decision making which eventually results in a situation that ultimately places this film is the same vicinity as Director Steven Soderbergh’s “Contagion” and yes, even Writer/Director Lars von Trier’s “Melancholia.” Of course, “Rise Of The Planet Of The Apes” is nowhere near as serious or as artistically far reaching as those aforementioned films, but I did appreciate the strength Wyatt, Jaffa and Silver gave to this material which could have just come across as something that functioned a hair above “silly.”

As previously stated, the film does contain some flaws. For all of the CGI special effects, I did feel that in some of the more expansive sequences of Caesar swinging through the trees for instance, that the film began to take on a look that was a tad too cartoon-like. He film’s weakest link for me was sadly James Franco whose performance was so surprisingly wooden that he was thoroughly unconvincing as a genius scientist that has the formula to cure Alzheimer’s. To me, he just seemed to have stumbled, in a narcotically induced haze, from the “Pineapple Express” set. He seemed to be uncommitted to the role, which is a shame as he is an actor with strong skills as evidenced in his gripping performance in Director Danny Boyle’s excellent “127 Hours” (2010).

Where the film’s special effects work strongest, aside from the heroically staged Golden Gate Bridge uprising climax, is through the marvelous, spellbinding work of Andy Serkis who provides the full performance of Caesar through the same motion capture technique he pioneered with filmmaker Peter Jackson in his roles as Gollum and King Kong. As I have said time and again, all of the special effects in the world do not mean a whit if there is no emotional content or substance to the story at hand. Serkis does so much more than provide “Rise Of The Planet Of the Apes” with substance. Andy Serkis gives the film its beating heart and strongly pulsing soul.

Just watch Serkis’ body language throughout of course, but mostly, I would love for you to pay attention mostly to his eyes and facial expressions which convey a profoundly true sense of soul searching and that aforementioned existential crisis, and all without saying a word…that is until he absolutely has to. For some of the rumblings I have seen advocating for the work of Andy Serkis to be recognized by the Academy Awards, I would have to throw my cinematic chat into that ring as his work is so deeply skilled and unprecedented that for him to be honored with full recognition by his peers would be wonderful indeed.

But, I am getting more than a little ahead of myself. Back to the film at hand, I will say to you that Andy Serkis is so compelling that he nearly single handedly gave me an experience with a film series I have not cared that much about and despite my opening statement, he transformed it into something where I am actually looking forward to the inevitable second installment. “Rise Of The Planet Of The Apes” is yet another example this year of a summer escapist film experience that was made in the fashion and spirit of how these sorts of films used to be made. It is a solid film made with impressive skill and commitment and I think for these filmmakers, they can only rise from this satisfying point.
Posted by Scott Collins at 5:32 AM