THE BLACK SHEEP RETURNS: a review of "Our Idiot Brother" 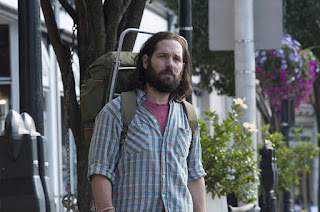 Paul Rudd deserves better than this. Much better. And for that matter so do Rashida Jones, Zooey Deschanel, Steve Coogan, Emily Mortimer and Elizabeth Banks for all of them are saddled with carrying a movie that is nowhere equal to any of their talents.

Dear readers, I have to say up front that “Our Idiot Brother” is a terrible film simply because it is one of those films that simply cannot be bothered to dig itself in and try. Yes, the aforementioned cast is an excellent one, the actual story provides a great framework for these actors, and yes, it does have its moments, including one choice and extremely well placed expletive that made me howl with laughter. But, when the proceedings were all said and done, I felt nothing and simply regarded almost the entire escapade as an empty exercise.

Rudd stars as Ned Rochlin, an affable, perpetually stoned organic farmer who, at the film’s start, is arrested and jailed for eight months after mistakenly selling marijuana to a police officer. Upon his release from prison, Ned is exiled from the farm by his passive aggressive pseudo hippie ex-girlfriend Janet (Kathryn Hahn). Now penniless, homeless and without the company of his treasured dog Willie Nelson, Ned travels back to his Mother Ilene’s (Shirley Knight) house for a family dinner with his three seemingly more successful and well-adjusted sisters and their respective partners.

There’s Ned’s oldest sister Liz (Emily Mortimer) who is married to Dylan (Steve Coogan), a brusquely impatient and romantically duplicitous documentary filmmaker. Liz and Dylan are extremely strict parents to the young and unhappy River (a fine and natural Matthew Mindler), whom they are both anxiously hoping to enroll into an exclusive private school.

Next, we are introduced to Natalie (Zooey Deschanel), Ned’s more free spirited, bisexual sister who is currently in a relationship with Cindy (Rashida Jones), an attorney. Yet Natalie’s fear of commitment lands her into an affair with the hipster artist Christian (Hugh Dancy).

Finally, we meet Ned’s third sister Miranda (Elizabeth Banks), a brittle, high-strung writer for Vanity Fair magazine who is struggling to have her first story published, an exclusive interview/expose with the philanthropist socialite Lady Arabella (Janet Montgomery). Unlike her sisters, Miranda is without a romantic partner but her neighbor Jeremy (Adam Scott) would love to take upon that role. Unfortunately, Miranda repeatedly shuns his affections while also repeatedly using him for any assistance with upkeep to her apartment.

As Ned plots and plans to earn the $500 needed for him to return to work and live at the farm, he is shuffled from one sister’s home to another, and his guileless, open hearted, uncompromisingly honest worldview inadvertently dismantles his sister’s cushy lives in more ways than one. Yet throughout all of the misunderstandings, hilarity ensues, valuable lessons are learned as the sisters discover that Ned really isn’t such an idiot after all.

If you detected a certain sarcasm within that last statement regarding the storyline of “Our Idiot Brother” you would be absolutely correct. And believe me, I don’t think that I have revealed any spoilers as I believe that any of you who have ever seen a movie before will know exactly where this film is headed from the set up. While there is nothing on the surface of this film that is dramatically wrong in regards to the actual storyline and despite the great cast and all of the talent on display, “Our Idiot Brother” is painfully and almost unbearably yet another entry into the dysfunctional family genre. But this film, like Writer/Director Noah Baumbach’s equally painfully unbearable “Margot At The Wedding” (2007), has absolutely nothing, I mean nothing insightful or new to say about the subject. Which is a shame, as well as a shocking surprise, because Peretz and his team of two screenwriters could not seem to come up with even one idea or observance about family life and sibling relationships that delved anywhere beneath the obvious. It felt as if Peretz thought the likeability and talents of the terrific cast, especially those of Paul Rudd, would be enough to collectively carry and save the film. But it wasn’t. The cast of “Our Idiot Brother” are all active, engaged performers who are willing, more than able and very ready to work, so why not really give them all something to sink their collective talents into instead of just squandering them all?

In addition to Peretz’s direction being completely flat, and too wry and dry for its own good, I just did not believe in many of the film’s characters at all which was a huge problem. I hated all three of the sisters as they are so insufferable, so narcissistic, so selfish, self-absorbed and egotistical that they were almost irredeemable. These three sisters were not represented in a satirical or surreal sense like Writer/Director Paul Thomas Anderson conveys with Adam Sandler’s army of seven sisters in the wonderful “Punch- Drunk Love” (2002). No, Peretz is attempting to present a grouping of real people in a real world with real problems but without any real depth whatsoever. And as good as Paul Rudd is in this film, the screenplay lets his character down over and again as his level of sweetly candid honesty is unrealistic to the point of being a near cartoon. Yes, he is stoned for a time and does live with his head in the clouds of a more utopian sensibility but his lack of common sense felt to be so phony, so contrived and simply existed in this fashion to keep the wheels of the plots creaking along.

Worst of all, and as previously stated, “Our Idiot Brother” is a wholly predictable enterprise with absolutely no surprises or at least, valuable insights into the inner workings of this family. Of course, this film does not need to be a Bergman-esque or Chekovian drama and I firmly believe that the story of a family’s black sheep returning to the fold to unravel and hopefully mend the lives of his three sisters could be mined deeply for comedic gold. So it just boggles my mind that Peretz even give the material an honest attempt as the entire proceedings feels like a sketch of a screenplay instead of a fully thought out experience.

Think of Director Lisa Cholodenko’s excellent “The Kids Are All Right” from just last year or even the complete works of Writer/Director Nicole Holofcener, which includes “Walking and Talking” (1996), “Lovely & Amazing” (2001), “Friends With Money” (2006) and last year’s terrific “Please Give.” Both Cholodenko and Holofcener somehow, and in Holofcener’s case, always discover probing, fresh and uncomfortably perceptive viewpoints with the familiar subject matter of families and the roles in which we play within the families we create as well as the ones we are born into. Both filmmakers also utilize a light tough but they always weave ways to burrow under your skin, peeling back one layer of difficult truth after another.

“Out Idiot Brother,” on the other hand, is completely and utterly superficial as the film is nothing more than sitcom situations, band-aid solutions and nowhere near as funny, honest or perceptive as it desperately needs to be…or thinks it is because these characters never really function as real people. Peretz just firmly sticks to the easiest, simplest and most obvious set up and conclusions: Ned’s three sisters are the true idiots who all have something to learn from Ned’s relative innocence and good hearted nature. And Peretz makes this point over and over and over again. Yawn.

Look, dear readers, despite my vitriol, I am glad that I saw this film as I did want to. I'm just mad at the result. But, I’m telling you, my patience grows thinner with each and every movie that comes along and wastes my time. Honestly, if the filmmakers aren’t going to try and make the best story that they can, then why should I watch it at all?
Posted by Scott Collins at 7:55 PM