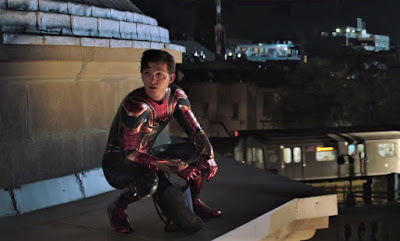 And what is known as "Phase 3" of the Marvel Cinematic Universe now comes to a close.

Now with my specific brand of "superhero movie fatigue," of which I have expressed to you time and again over the years, I am indeed of somewhat mixed feelings at this time. On the one hand, it is good to know that we will have at least a year before we have a new Marvel installment to experience and to that, I am already enjoying the fact that we will have a break, some time away to allow ourselves to miss this cinematic world and experience new ones before the inevitable grand return.

On the other hand, what in the world could possibly follow Anthony and Joe Russo's "Avengers: Endgame," the titanic and outstanding culmination of Marvel's 11 year, inter-connected adventures in the movies?! One woud think that the powers that be at Marvel would want to have significant time away to re-group and think about where they could possibly go next now that the battle against Thanos has concluded with a certain line-in-the-sand finality. In short, the Marvel movie world will never be quite the same again.

So, we arrive at Director Jon Watts' "Spider-Man: Far From Home," the sequel to the surprisingly terrific "Spider-Man: Homecoming" (2017), as well as serving as what is essentially an epilogue to "Avengers: Endgame." Even more surprisingly, what Watts has delivered is no mere post-script, a more low-key palate cleanser to the gargantuan epic nature of "Avengers: Endgame."

While the tonality of the latest escapade of your friendly neighborhood Spider-Man is decidedly lighter than the wrenching, doom laden experience of "Avengers: Endgame," it is not an exercise in frivolity. On the contrary, Jon Watts has accomplished a feat that deserves any and all of the attention it receives as "Spider-Man: Far From Home" is a richly textured, high-flying and wholly complete installment that not only closes the book on all that has arrived before but it also deftly sets the stage for what may arrive in the future, while simultaneously ensuring that this one film can stand firmly and fully upon its own cinematic feat.

Opening months after the triumphant and tragic events of "Avengers: Endgame," the world is still within its earliest stages of coming to terms with Thanos' inter-galactic genocide (heretofore known as "the Blip") and recovering from it.

Peter Parker, otherwise known as Spider-Man (again played wonderfully by Tom Holland), more than personally affected by "the Blip," returns to his Queens, New York high school wanting nothing more than to take an extended break from his super-heroics, going so far as to blatantly ignore contact from Nick Fury (Samuel L. Jackson) himself.

Yet, not long after arriving in Venice, potential cataclysm arrives in the form of the Elementals, massive creatures devised of the four elements of air, water, fire and earth and all ready to wreak havoc--the very type of forces Peter desperately wishes to avoid and is indeed unable to stop all by himself. Help miraculously appears in the form of Quentin Beck a.k.a. Mysterio (a terrific Jake Gyllenhaal), a hero from an alternate Earth in the expanding Multi-verse who has been hunting down the creatures and bent on destroying them once and for all.

For Peter Parker, Beck is precisely the figure he feels that he needs at this time; someone more equipped than he to shoulder the weight of saving the world and also possibly, central ingredient to a potential new team of Fury's Avengers. But all is not as it seems, as Peter reaches a new crossroads in his life as Spider-Man...and oh yes, will he ever be able to ask MJ out for that date??

In a time and place when we really do not ever need to have another Spider-Man anything, Jon Watts' "Spider-Man: Far From Home" is indeed that rare sequel that improves upon its already strong first installment, through a tight screenplay, rich characters, excellent performances throughout, superlative visual effects as well as one razzle dazzle of a cliffhanger that upends the Marvel universe even further. Watts also greatly accomplishes performing the especially tricky task of building upon the Marvel Cinematic Universe by immediately following up "Avengers: Endgame" and the consequences of "the Blip" while not sacrificing the more playfully energetic tone and energy of "Spider-Man: Homecoming" and the results are absolutely splendid.

Jon Watts continues to create a dazzling aesthetic that contains a pace and style that suggests a work akin to Preston Sturges by way of John Hughes, as the dialogue and humor is as superbly fleet of foot as the action set pieces. While he continues to have the film fly at a breakneck pace, Watts attains an even greater sense of control and purpose for detailing his vision for what a Spider-Man film could be, and for "Spider-Man: Far From Home" (and without divulging any potential spoilers), he has created a film that works simultaneously as a comic book adventure, romantic comedy, coming-of-age film and even one that is more than self-reflexive regarding the nature of how we interact with not only special effects, but the art of the movies themselves--engaging ourselves within the act of believing what we know is unbelievable. And dear readers, Watts has devised of several psychedelic sequences that have, in my humble opinion, skyrocketed past the sights seen in the Quantum Realm in Peyton Reed's "Ant-Man" (2015) and the mystical metaphysical visions showcased in Scott Derrickson's "Doctor Strange" (2016).

For as genuinely funny and as entertaining as "Spider-Man: Far From Home" is, I deeply appreciated the sense of pathos that Watts gently injected into the film regarding Peter Parker's inner journey and for that matter, Tom Holland is equal to every moment given to him, creating tremendous empathy and a hero we will always root for. In many ways, especially as Peter Parker looked up to Tony Stark as his mentor, the film places echoes of Stark's journey within Peter Parker's.

Up until the devastating events of Anthony and Joe Russo's "Avengers: Infinity War" (2018), the Peter Parker we knew was one of restless teenage abandon, a young man anxious to be a part of the action, to be an Avenger, to be an adult and his recklessness literally reduced him to ashes. With "Spider-Man: Far From Home," we meet a Peter Parker forever changed from the events of Blip and rightfully so, he is reluctant to pick up the hero's mantle again and more than likely, he is indeed scarred with PTSD, just like Tony Stark was afflicted after venturing through a wormhole in Joss Whedon's "The Avengers" (2012).

Jon Watts is now delivering a more reflective Peter Parker, more troubled, shaken and unsure of himself plus his reluctance to grow up as well as even questioning his desires to be Spider-Man anymore, let alone pick up where the previous Avengers had left off. All of this is handled in a light, and even tender style, again much like a John Hughes film, where smack dab in the middle of the adventure, Watts gives us a Hughes-ian heart-to heart between Peter Parker and Tony Stark's former bodyguard Happy Hogan (Jon Favreau), designed to help Peter make sense of where he has been, his present state and how he will move onwards because even after tragedy, life does indeed still progress...and the world of Marvel still needs its heroes.

Dear readers, this year has truly found the Marvel movies in an especially sweet spot, as well have received three films this year that have interlocked and advanced the larger narrative intricately and with grand style and substance. Jon Watts' "Spider-Man: Far From Home" has beautifully concluded this latest wave of Marvel films not with a placeholder but one that is essential to the ever expanding conceptual canvas.

And for as much superhero fatigue as I am harboring, this film has made me more than thirsty for the next one.
Posted by Scott Collins at 9:31 PM