ALL THE WRONG NOTES: a review of "Yesterday" 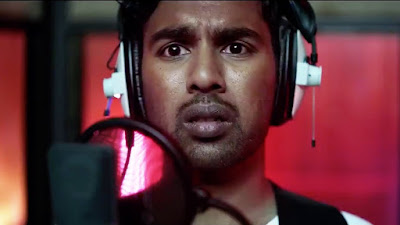 The mystery and magic of The Beatles will never cease to amaze me.

For example, for all of us who have ever loved The Beatles, it amazes me that over these 50 plus years and regardless of generation, race and walk of life, these four men--John Lennon, Paul McCartney, George Harrison and Ringo Starr--were inexplicably able to create music that spoke to the time in which it was created while also transcending it, generating songs that were universal and yet, for every listener, the music and the experience of interacting with it was also intensely individualistic. My life with The Beatles is not the same as anyone else's. My favorite songs and albums are not the same as anyone else's as the experiences of them are indeed so deeply personal to the point of even being primal. And yet, we all can join together for the same shared feeling...the love we all have for the same music.

What an unbelievable feat to achieve and how extraordinary that even now, in the 21st century, the songs feel as fresh as the day they were written and recorded and I just find it inconceivable to imagine a world without The Beatles existing in it--and that even includes the inevitable sad day to come when all four men pass on into the universe.

This conceit is precisely what makes the concept of "Yesterday," the new musical fantasy from Director Danny Boyle and Writer Richard Curtis, so ingenious. To honestly imagine a world where The Beatles, so omnipresent and a part of our collective existence as the sun and the sky, suddenly vanished from existence and human consciousness save for only one individual is exactly the conceptual kick in the cinematic pants the movies have needed since we have been so overrun with sequels, prequels, re-boots, remakes and re-imaginings. And that is what makes it so tremendously disheartening to announce that "Yesterday" is a resounding failure.

It is not for lack of imagination for the concept is, as I have already stated, ingenious. But an idea or a concept is not a film and unfortunately, this is what both Boyle and Curtis have arrived with: an idea masquerading as a full length film, an idea that clearly was never even thought of beyond its own initial stages, making for an experience that is demonstrably beneath anything worthy of The Beatles and for anyone who has ever loved them. Yes, this is easily the worst film I have seen so far this year.

On one fateful night, as Jack is riding his bicycle home, a global blackout occurs and he is hit by a transit bus, knocking him to the pavement unconscious, When he awakens in the hospital, he soon discovers (aside from two teeth being gruesomely battered out of his mouth from the accident), that he is the only person in the world who possesses any knowledge of The Beatles.

Seizing this newfound opportunity, Jack soon begins to pass off the music of The Beatles as his own compositions, a decision that ultimately garners him worldwide attention and acclaim as the greatest singer/songwriter even as he grows increasingly conflicted now that is life has become a lie.

Dear readers, I am simply incredulous at the wasted opportunity Danny Boyle's "Yesterday" actually is, especially when armed with such a truly inspired concept. In some ways, it is the latest entry in the new round of, what I guess could be called "jukebox classic rock musicals," during which the overall result is to just have audiences happily sing along with the tunes we all know and love and to completely disregard the work it takes to create a good movie fueled with and anchored by great storytelling. And despite the large amount of songs on display in the film from end to end, "Yesterday" accomplishes, so to speak, a bizarre feat--to be a Beatles inspired movie that honestly has really no regard or any real opinion about The Beatles.

As I watched "Yesterday," Julie Taymor's Beatles inspired musical kaleidoscope "Across The Universe" (2007) came to mind often as that was indeed an ambitious yet unsuccessful film that was a wholly strange one as Taymor created an experience which was Beatles inspired, contained characters named after Beatles' song characters who sang one Beatles song after another and existed within a very real 1960's landscape filled with the iconographic figures and events of the era...except for The Beatles themselves!

To be fair, Boyle and Curtis do create some genuinely warm moments throughout "Yesterday," while also delivering a gentle satire about the sad state of affairs in the 21st century music business (addressing the novelty of having one songwriter as opposed to a fleet of writers and producers was sharp and additionally, Ed Sheeran, who portrays himself, is a trooper with all of the barbs flying in his direction). Again, Hamish Patel, in his debut film performance during which he sings and elicits musical performances with genuine verve and depth, is absolutely terrific as is Joel Fry as Jack's sidekick roadie, Rocky.

And finally, we have Lily Allen, who unquestionably made the most of her criminally underwritten role as the long suffering, perpetually unrequited Ellie. She certainly shared some rich chemistry with Patel but honestly, it is 2019, and our actresses deserve so much better than being forced to enliven the type of insipid role that went out of date decades ago.

But having Lily Allen essentially look pretty, wistful and sad for two hours was not this film's greatest cinematic sin. It is the fact that both Danny Boyle and Richard Curtis elicited no ideas beyond its initial one. Granted, as the film begins, all is well and involving. As Jack slowly begins to realize how the world around him has changed and he begins to plagiarize Beatles songs and then perform them for friends and family, he doesn't initially receive any rapturous responses.

At first this confused me but quickly, I realized that this was may have been the right move to make because, if we are to believe that we are witnessing a world that has no idea of who or what The Beatles even are, then, of course, it would be a world that would never miss them. In doing so, no one would know what they are missing in the first place. It would be as if say...Culture Club ceased to be in the public's collective consciousness or something like that. The world would simply go onwards without a care.

This is where "Yesterday" goes disastrously wrong, and even during those early scenes when Jack's friends and family are not initially bowled over by his "new" songwriting compositions. For if these people are not transformed by the songs, then what is it about The Beatles' music that has made it so beloved for generations upon generations in the first place?

"Yesterday" doesn't even begin to even ponder what it is about The Beatles and their music that would even make it something to be loved and therefore to be missed to the point where the world itself would never feel the same to Jack. And in doing so, Jack's rise to stardom also does not make any sense whatsoever because the film never bothered to explore what makes these songs so brilliant and timeless.

Why do we love The Beatles? This is really a question that only people who love The Beatles can answer for each and every answer, I would imagine, would be so different yet so inter-connected. Furthermore, if the same people were asked how they would envision a world with The Beatles, just imagine what answers would be given!! In essence, a potential film like that is more interesting than any moment within "Yesterday" because neither Danny Boyle or Richard Curtis ever, at any point, bother to even approach that very question and it was just unfathomable to me, and after some time, it even began to make me angry.

I absolutely hate it when movies are wasted opportunities for no reason other than the filmmakers never tried and "Yesterday" is precisely that, a movie that doesn't even try to address the very subject it introduced. It was a film inspired by The Beatles that possessed no opinions about The Beatles so what was the point of the whole escapade? To that end, the film often abandoned the concept to just rally itself around terminal romantic comedy cliches as if we were witnessing rightfully discarded scenes from Curtis' "Love Actually" (2003).

And even then, neither Boyle or Curtis ever seemed interested in how or why something so bizarre like the erasure of The Beatles could happen--and for that matter, why are other well known items like Coca Cola, Harry Potter and Oasis (a nice touch) removed from public knowledge, and therefore, existence? And with an omission this glaring, "Yesterday" is a film that truly contains no reason or resolution. Honestly, Thanos' SNAP was more compelling!!!

And even then, I absolutely loathed a late film sequence which was clearly designed to be a moment of perhaps tearful, hopeful whimsy but in actuality, formulated a moment and emotions that felt so unbelievably wrong and frankly, irresponsible as it was so shamelessly cheap.

Dear readers, I happened to see this film on the 79th birthday of Ringo Starr and one month, almost to the day after seeing Paul McCartney live in concert in my city and from the 15th row at that! Those two milestones hold such significance for me because The Beatles have been instrumental to my DNA ever since the year of my birth and for 50 years since my arrival. I have never known a world without The Beatles and I honestly am unable to conceive of a time when they did not exist, even though I know that time did exist.

For me, The Beatles are dreams and visions. The Beatles are hopes and heartbreak. The Beatles are plans, schemes, fun, frivolity, passion, playfulness, pain, healing, uplift, despair, individualism and independence as well as blessed union and communion. The Beatles are indeed peace and love as presented through the prism of an inexplicable alchemy that happened when those four men joined together to play and create music.

Why didn't Danny Boyle and Richard Curtis do just that? Just sit together, shoulder to shoulder and transcribe what The Beatles possibly meant to themselves and then, fashion a story and screenplay based upon the list they devised and then, fashion a cinematic experience to honor their perceptions of what The Beatles mean to them? These two men are talented filmmakers and storytellers...so, what in the hell happened with "Yesterday"?

The Beatles and everyone who loves them deserved so much better.
Posted by Scott Collins at 8:02 PM