SHINE A LIGHT ON ME: a review of "Midnight Special" 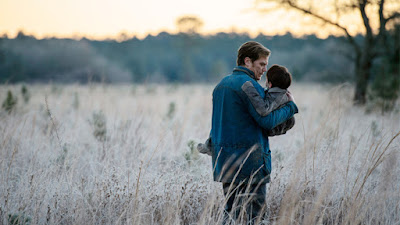 Now let's see if I can get one more in just under the wire.

One of the very best things I love about the movies is that sense of discovery, the surprise, the unexpected qualities that make the overly familiar feel so excitingly fresh. One of the things that I hate about the movies--or better yet, the movie business in the 21st century--is how the over-abundance of the major big budget releases and the plethora of multiplex movie screens around the country that only show those films at the expense of any other films is more than troubling. The devotion to the weekend box office race has long outweighed attention to quality, especially when it arrives in considerably smaller packages, now making for a time when smaller, independent films don't even have a chance to find, let along build an audience. And that is even when those films are even released theatrically anymore.

In recent years, I have been intrigued by the film of Writer/Director Jeff Nichols who first grabbed my attention powerfully with the psychological/apocalyptic thriller "Take Shelter" (2011) and the Southern, Mark Twain influenced coming of age drama "Mud"(2012).

When I first saw the cryptic trailers for his follow-up feature entitled "Midnight Special," I was more than ready to see just what Nichols would serve next. But then, the film barely played in my city, arriving and departing in just one week's time. Now that is a profound shame, because after now having seen the film, I am very excited to point you firmly in its direction as "Midnight Special" is one of 2016's most surprising, thrilling, perplexing, mysterious, instantly captivating releases that I really think you would find yourselves happily sinking your teeth into as the cinematic world of Jeff Nichols is more than deserving of your attention.

At this point, I tend to provide you with a plot description but in the case of "Midnight Special," I strongly feel that the less you know the better for its overall effect will hit you more sumptuously by not knowing terribly much about it. Taking a cue from the aforementioned cryptic trailer, I will say the following to you..

"Midnight Special" stars Michael Shannon as Roy Tomlin who is on the run throughout rural Texas with his friend Lucas (Joel Edgerton) as well as with his 8 year old son Alton Meyer (Jaeden Lieberher), a child adorned with strange abilities, most notably blinding white lights that blast from his eyes.

Involved with the pursuit and the overall adventure within the film, Nichols features a Texas religious cult led by Pastor Cavin Meyer (Sam Shepard) raided by the FBI, the destruction of an Air Force satellite, the increased presence of Alton's fugitive Mother (Kirsten Dunst) plus a more genteel Agent (Adam Driver), and the metaphysical revelations found within an everyday sunrise plus even more.

Jeff Nichols' "Midnight Special" is a chase film, a Father/son drama, a Southern thriller and science fiction adventure that essentially feels like the third act of a longer film in which we have not seen the first two sections. And to that description, this is an excellent storytelling tactic as the film opens with a combined sense of mystery and urgency as we are all thrust into a  high stakes adventures without really knowing who the participants are, their relation to each other, who is even chasing them and why.

All of these qualities--plus Cinematographer Adam Stone's rugged visuals and most definitely, Composer David Wingo's minimalist yet deeply intense score--instantly create a palpable intensity that is further compounded by the crispness of Nichols' writing and the no frills qualities of his direction, which often finds ways to nearly lull you into a certain relaxed state of mind just to rapidly pull the cinematic carpet out from under you time and again. For as many movies as I have seen throughout my life, I can easily that I have not jumped up in my seat with excitement and even honest shock as I did during this film, signifying that Jeff Nichols knows precisely what he is doing!

All of the performances are first rate with Shannon and Edgerton each performing strong, grounded work as taciturn Southern men thrust into an inexplicable escapade where their respective friendship and love for this special young boy provides "Midnight Special" with its firm emotional core which remains rock solid even when the fantastical occurs. Nichols also keep a tight rein on the special effects, only dolling them out when necessary, thus producing the mightiest effect, which is often surreal, frightening and filled with the precise sense of awe and wonder that is missing from most big budget CGI bombasts these days.

I really do not wish to say much more about this film as I just wish for you to take that chance and seek it out as it is now available on home video formats and it is even currently in the HBO rotation should you have that channel. Dear readers, Jeff Nichols is indeed the real deal, a serious cinematic storyteller that is displaying an increasing versatility and idiosyncratic artistic voice while flying completely under the radar--perhaps maybe too far beneath that radar in 2016 as even his second feature of this year, the inter-racial marriage love story/legal drama "Loving" has arrived and departed my city just as rapidly as "Midnight Special," and again despite the critical acclaim both films have received.

What a shame it would be for filmmakers such as Jeff Nichols to find themselves with less opportunities to creatively express themselves due to the unforgiving nature of the marketplace and the seemingly impenetrable wall of superheroes, sequels, prequels, reboots and so on and so forth.

Jeff Nichols possesses a most original voice and "Midnight Special" is truly one of 2016's most uniquely creative and presented films.
Posted by Scott Collins at 6:30 PM