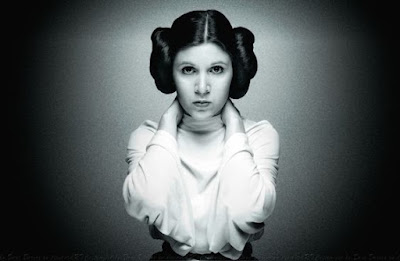 I am certain that at first glance, the title of this posting combined with a visual remembrance of actress Carrie Fisher, who passed away just three days ago at the age of 60, may seem to function as a disconnected pairing. But, please trust me, they are firmly connected in my mind and I will do my best to explain.

Dear readers, it was seven years ago on this date when I sat in my parents' basement during a Christmas visit and gave birth to this blogsite and I have to express to you that within those initial moments, I had never been so frightened, so nervous, to completely unsure of myself to even begin to share this seismically important piece of myself with the world.

Mostly, I was certain that not even one soul would care a whit about anything that I woud have to say, so why bother? And then, if someone actually did care enough, I was then certain that it would be wholly disregarded as badly written pap not worth anyone's valuable attention or time. And yet, thankfully, so very thankfully, I was proven wrong time and again by all of you--you beautiful people who have, for whatever reasons, taken the time and energy out of your very full lives to read even one word of what I have written. And now, officially seven years and a hair over 600 postings later, here we are, sharing this wonderful moment. I have said it time and again that my gratitude to you is bottomless and it holds true to this very moment and will continue to do so for as long as Savage Cinema remains in the world, for you are the fuel that gives me the energy to keep trying, to keep writing and to keep remaining brave enough to hit that "Publish" button one more time.

Thank you for all of your support, kind words and especially for keeping Savage Cinema as a positive space on the internet, an environment that still surprises me with its vitriol and unrepentant venom. I never want Savage Cinema to ever become a home of self-congratulatory snark, self-indulgent hipster irony and self-serving sarcasm. I wish to write as best as I am able about the medium that has given me such grand fulfillment for so very much of my life. And that is precisely what brings me to having this posting serve as a salute to Carrie  Fisher.

In 2017, George Lucas' "Star Wars" (1977) will reach its 40th anniversary!!! I know! I am just as stunned as any of you to place such a number onto something that has become such a pivotal piece of our popular culture that feels as eternal as it is timeless. It almost feels as if there was never a time when "Star Wars" was not a part of the world but on the contrary, there actually was such a time and I am old enough to remember it, much like a line in the sand signifying "before" and "after."

There is no way to ever express the following sentiment enough: "Star Wars" completely changed my life on May 25, 1977, when on that inaugural day, I saw the movie that made me fall in love with the movies as an art form. I was only eight yeas old and before that night, the movies were simply a fun outing for my family...as well as a great place to get some delicious popcorn! But on that night, once that now iconic logo accompanied by John Williams' equally iconic fanfare blasted across the move screen in full 70MM and  Dolby sound glory, I was instantly transported, essentially having an out-of-body experience that deliriously made me forget where I actually was sitting until the movie ended, house lights went up, and I was wrapped in stunned silence all the way back to my family's car until my Dad looked at me and simply said, "May the Force be with you," to which I answered with a mighty, "YES!!!!!!!!!!!!!!"

That night was the very first night when the language of the movies introduced itself to me and thus began to take me upon a journey that has endured powerfully for nearly 40 years through countless films seen and digested, filmmakers who revealed themselves as storytellers as brilliant as any novelist, critics and writers to help me process what I have seen and to further inspire me to think about films as art, and of course, that inexplicable magic that still occurs for me when those house lights darken and a shared communal experience with a roomful of strangers begins to weave its spell.

Movies, for me, are sources of travel...around the world, and into the soul and the spark of imagination itself. They are personal and epic. They are intimate and universal. They are dream worlds yet somehow, at their very finest, they are unabashedly real, regardless of how fantastical they may be.

With regards to Carrie Fisher, I will not use this post to speak to the entirety of her life and career, which included her prolific writing of books, performance pieces and uncredited script doctoring, continued acting and one-woman live performances as well as her fearless activism regarding mental illness and drug abuses by being so open with her own struggles. No, for the purposes of this posting, I honor and thank Carrie Fisher for the character she embodied so completely as she was instrumental for beginning my lifelong love affair with the movies.

What Carrie Fisher accomplished beautifully and brilliantly was to breathe such vibrant life into a character that only exists in dreams, Princess Leia is indeed larger than life and Fisher made her so real to me and even now, as I re-watch that film, I am transported all over again. Truth be told, when she made her first screen appearance as General Leia within J.J. Abrams' "The Force Awakens" (2015), it was a moment that instinctively brought tears of joy to my eyes as, again, I was transported to the moment where it all began for me.

As I think about Fisher and her time portraying Leia, I am still so amazed at how even at the age of eight, and being aware of of the entire enterprise as being "make believe" as its most elaborate, just how real it all was...and therefore, remains. To me, Carrie Fisher never really acted as or played Leis. She simply just was. It's weird to think that she was 19 years old when she first became Leia because to me, the character is as timeless as the film itself, and for that matter ageless. And it is that precise blurring of the lines between reality and fantasy that intrigues me to this very day about the movies. How the possibilities of what can be achieved are as endless as the imagination, and even better, the endless ways one can be inspired.

There was no way of knowing on that night almost 40 years ago, then when I first saw Carrie Fisher upon that movie screen that I would develop this particular passion that would furthermore bring me to the point seven years ago when I launched this blogsite. Her priceless contribution directly led me to the next movie and all of the movies thereafter, to all of the writers, critics, actors, filmmakers, composers, cinematographers and behind the scenes magicians who bring dreams to living dreams year after year, and without question, her contribution led me to this very moment--sitting at this computer, in celebration and gratitude for seven full years of writing and building Savage Cinema.

"Star Wars" would never had worked so brilliantly without the participation of everyone involved in its making and for that reason, Carrie Fisher's influence and artistry is undisputed. If one were to take her away from the film, the entire experience would crumble and it would have never become was it has endured itself to being. What Fisher accomplished has inspired more people than we could ever imagine and her essential piece of that specific process and product eventually allowed this very site to exist in the first place.

I would write these same words for Mark Hamill, Harrison Ford, and definitely George Lucas himself. But for now, it IS for Carrie Fisher, the definitive intergalactic Princess, who gave birth to countless inspirations and dreams and for whom I will be forever grateful, even as I elicit a sad sigh now that she too has departed our material world in this merciless year that has taken so very many from us.

So from the visions of first seeing Carrie Fisher as Princess Leia, seeds were planted that grew over the course of 40 years and sprouted through me with Savage Cinema, which then traveled from me to you and then back again due to your feedback, your interest, your encouragement, your support and friendship. I thank you, I thank you, I thank you even more and humbly so, for without you, what would even be the point? And without Carrie  Fisher, it may have never happened at all.

For her, for all of you and for myself and my eternal love of the movies, I head into Year Eight with the same anxious anticipation for whatever will arrive next...just as I always have.