YOU ARE HERE: a review of "Wild" 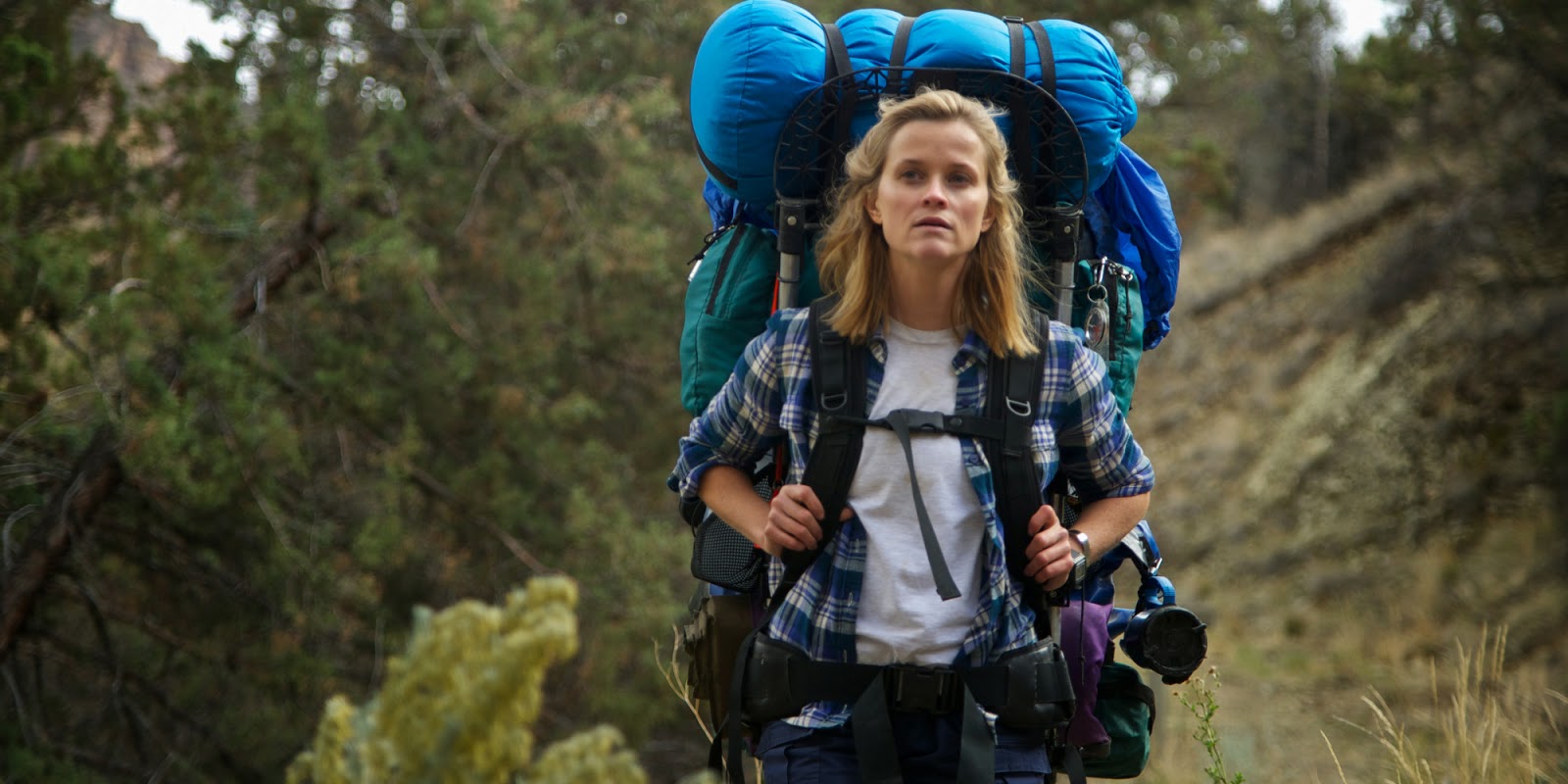 "WILD"
Based upon the memoir Wild: From Lost To Found On The Pacific Crest Trail
by Cheryl Strayed
Screenplay Written by Nick Hornby
Directed by Jean-Marc Vallee
**** (four stars)

For what will undoubtedly be the final film I will see in 2014, I am so thankful to end the year on such a powerfully high note.

I had my skepticism firmly in check when I first saw the trailer for "Wild," the adaptation of the memoir by Cheryl Strayed as well as latest film from Director Jean-Marc Vallee, who just last year helmed the celebrated "Dallas Buyers Club" (which I unfortunately still have not seen). My trepidation was not due to the book (which I have not read) nor to Mr. Vallee's filmmaking skills. In addition to worrying the film would be more in the vein of Director Ryan Murphy's vapid "Eat Pray Love" (2010) and less like Director Sean Penn's transcendent "Into The Wild" (2007),

My unsure feelings behind whether I even wanted to see this film was all due to Reese Witherspoon, an actress, whom despite her serious talents, is just one of those figures who just rubs me entirely the wrong way. Thankfully, both Witherspoon and the film overall placed any such cinematic fears to rest as she and the film are equally outstanding as "Wild" is a richly soul stirring experience that has earned its very high spot on my list of the finest films I have seen in 2014. In addition to this film not being one to be missed, it is one that demands to be fully experienced and deeply felt,

As with the memoir, "Wild" traces the solitary and 1000 mile plus journey across the Pacific Coast Trail of Cheryl Strayed (Reese Witherspoon) as she attempts to reconstruct her life after the death of her Mother Bobbi (Laura Dern), her divorce from Paul (Thomas Sadoski from HBO's "The Newsroom") and a lengthy spell of self-destructive behavior which consisted of promiscuous sex and drug addiction.

Thankfully, "Wild" is more akin to "Into The Wild" but even more thankfully, Jean-Marc Valle has constructed a film that stands firmly on its own two cinematic feet. It is a visually enthralling experience that provoked some deep emotions within me as I watched Cheryl Strayed's struggle for personal redemption and coming to terms with the damages of her past. In constructing the film, Jean-Marc Vallee has brilliantly conceived of Cheryl Strayed's odyssey through a mostly non-linear narrative, where the on-going hike, with all of its physical and emotional obstacles, would coincide and parallel with key moments and memories from her life previous to the hike.

As gorgeously filmed as "Wild" is, and Cinematographer Yves Belanger should definitely receive some awards attention, tremendous credit must be given to Editors John Mac Murphy and Martin Pensa for the stellar layering of events and memories which weaved themselves into a fabric that felt akin to time travelling. And it was here that I found "Wild" to actually quite a lot in common with the likes of Writer/Director Richard Linklater's "Boyhood," as Valle has fashioned a narrative that speaks directly not only to how life is lived but what it means to be alive.

For what is life but a form of time travel? It is not as if the memories that we have all accrued have vanished into the ether once they have been fully lived. While some memories and events may be more prevalent than others, every singe moment, person and experience have congealed to formulate the person we each happen to be at this precise point in our personal histories. Or pasts inform our presents as we travel into the future and Vallee exhibits this very feat on such a direct yet profound emotional and physical level through the entirety of "Wild" that I believe that the film can truly inspire a depth of individual soul searching as you view the film yourselves.

Just as Cheryl Strayed hikes forwards, her mind keep travelling backwards, falling in and out of one memory after another as she strains to keep pushing ahead, battling herself whether to quit this excursion or not, and hopefully discovering the spiritual deliverance that just may allow her to see that all of her life experiences and choices have held value for without them, she would not even be upon this journey in the first place. But even so, and despite any wishes we have ever harbored for retreating from the world for some sense of self-imposed isolation, I do not think that we all need to hike the PC all alone in order to attain a similar goal, and frankly, I don even think this is what Vallee is suggesting.

Using the story of Cheryl Strayed as a catalyst, I think what Vallee has performed with "Wild" is to show us that we do indeed take these interior journeys every day that we live life. For if every moment that makes the fullness of our lives possess meaning, I think that Vallee has exuberantly created a film, like Director Danny Boyle's grueling "127 Hours" (2010), that celebrates every individual's place in the world just because we are alive as well as for those who have lived and will live in the future.

While Cheryl scoffs at a map of the universe that proclaims "You Are Here" during one point in the film, I felt that "Wild" is a true celebration of the life experience, but not through any sort of Hallmark card sentiment, something that would have made me race towards the theater exits. Vallee is celebrating life for all of the grime, muck, pain, anguish and just plain shit we have all endured in our own ways, and how we, as human beings, do have the capacity to hopefully find the ways to remain intrepid, to carry onwards and survive. Life is hard fought but the potential is ours to reach and "Wild" showcases Cheryl Strayed fighting, growing, rising, falling, failing and enduring over and over again, a very cycle that should be celebrated.

Yet for all of the epic, humanistic qualities of "Wild," Vallee also delves into the experience that is completely specific to Cheryl Strayed, and that is her experience as existing as a woman on this Earth. It is very interesting to me that I have seen "Wild" just days after seeing Director Tim Burton's terrific "Big Eyes," as both films are not only about an exploration of female empowerment but also a decidedly pointed and savvy reality check about the treatment of women within our society.

For all of the necessary discussion that our society is and needs to have concerning "White privilege," ta very similar discussion needs to be had about "Male privilege," how the infrastructure of our society is organized for the benefit of those for no other reason than the gender to which they happened to have been born. With regards to "Wild," just the concept of a woman embarking upon such a perilous journey alone raises eyebrows in a way where a man performing the same feat would not provoke. Furthermore, throughout the film, as Cheryl occasionally meets up with more travelers and other people upon her journey, I found myself taking note of my emotions every single time she came in contact with men just based upon how they looked and behaved. There were some male characters I instantly felt no sense of threat from but over and again, and especially during one especially overt sequence, the very real threat of rape sent alarm bells running through me due to the precariousness of Cheryl's journey (don't worry--there are no rape scenes in the film at all).

It's not as if the unforgiving aspect of the natural world wasn't enough to deal with but Cheryl, being a young, attractive woman all alone in the world, is forced to continuously keep her guard up just due to how every man may or may not react to the sight of her. Which men would provide her favors just based upon how she looked combined with any misplaced sense of sexual expectations or who would perform favors for her just because she was just another human being? On the flip side, there is another sequence where Cheryl at a rest stop, decides to pick up a young man herself fr a night of sexual activity and then venture upon her way again with no regrets the following day. All of these scenes are deeply embedded into the complete fabric of "Wild," just as they also were in Director Jonathan Frazer's crystalline and disturbing "Under The Skin," because it is those very unwritten societal expectations, desires and prejudices concerning the sexes that all contribute to a larger world where women are not seen as human beings but objects meant to be overpowered, controlled, used and abused, this providing Cheryl Strayed with yet another life obstacle to circumvent. And with that, "Wild" also works as a feminist diatribe for the journey women are forced to endure just for being born female.

Yet, for all of the struggle, strife and trauma, Jean-Marc Vallee's"Wild" is a tremendously hopeful experience that I strongly feel that all of you will have much to discuss once you leave the theater. And isn't that something to celebrate? When art can inspire a well spring of emotions and thoughts within ourselves that we would only wish to share with other people, thus opening up new discussion into how we can all understand each other and ourselves just a little bit better? Jean-Marc Valle's "Wild" is an exquisitely beautiful film anchored by Reese Witherspoon's powerhouse performance, which just may be her most accomplished work to date and is fully deserving of all of the awards season attention it is bound to receive.

While I have several more 2014 features to view in January, I already know that it will be very difficult to find another as magnificently humane as Jean-Marc Vallee's "Wild."
Posted by Scott Collins at 4:02 PM