ROCK AND ROLL: a review of "Top Five" 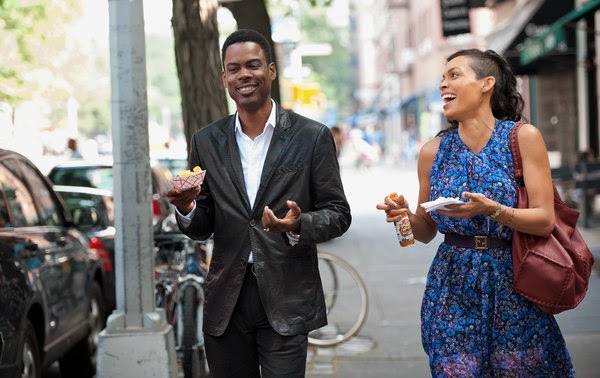 If the philosophical musings and meditations of Writer/Director Richard Linklater somehow merged with the blistering confessional comedy of Richard Pryor, I think you would have quite a fine idea of what kind of an experience "Top Five," the third directorial feature from Chris Rock, actually is.

For me, the film represented an artistic breakthrough for the veteran comedian, a figure that I have admittedly taken many, many years to warm up to. That is true, dear readers. There was a time when I could not stand the sight and sound of Chris Rock whatsoever, as his loud, shrill voice just kept me at an arms length, and his tenure on "Saturday Night Live" combined with the terrible movies he was making (quite a few of them with Adam Sandler) certainly did him no favors. But it was through his stand-up comedy specials that I slowly began to see the razor sharp creative mind at work as his cultural commentaries about race, sex, politics and relationships was as ferociously unrepentant as it was so wisely perceptive and pensive.

Lately, it feels as if Chris Rock is on a supreme roll as his press junket interviews, essays and viewpoints concerning race relations in 21st century America have contained an even greater fire and truth than he has displayed quite so explicitly before. Because of that, it feels as if Chris Rock has reached a creative crossroads and with "Top Five," Rock has delivered a sharply satirical, cheerfully vulgar, smartly astute and surprisingly romantic adult comedy that houses a distinctly serious core that speaks directly to life as it is lived right here and right now.

For all intents and purposes, "Top Five" is a film that is fueled not by plot but exists as a dual character study. Chris Rock stars as Andre Allen, a famous stand-up comic and movie superstar of the "Hammy The Bear" series, a trilogy of action comedies in which Allen plays the titular role, a cop dressed inside of a bear suit. Yet, despite his meteoric success, as well as his potential marriage to the vapid reality television star Erica Long (a strong Gabrielle Union), Allen is ensconced in an inner crisis that has left him unwilling to perform stand up again, wary to don the bear suit for a fourth installment of his lucrative franchise and possibly not return to comedy at all. His desires for more serious fare has led to the arrival of the new dramatic feature film about the Haitian revolution entitled "Uprize!," in which he stars.

On the day of the release of "Uprize!," Allen, on his promotional tour throughout New York City, is joined by New York Times journalist Chelsea Brown (Rosario Dawson), who accompanies him to obtain a probing interview. During the course of this long day and night, both Allen and Chelsea are forced to confront their individualized personal and professional forks in the road, as well as their possible building feelings towards each other.

Most certainly, "Top Five" is Chris Rock's version of Writer/Director Woody Allen's acerbic classic "Stardust Memories" (1980), in which Allen portrayed a famous comedian who no longer felt funny and wanted to devote his creative energies into more seriously meaningful material and projects despite the vehement objections of his fan base and the derision of his critics. With "Top Five," Chris Rock has taken what could have easily existed as a vacuous vanity project and transformed it into a film in which he clearly has something to say and prove. He has seamlessly bridged the gap between the boldness of his stand up material and his equally bold political viewpoints into a character and full film experience that is precisely as sharply intelligent and pointedly funny as Rock probably is in his real life, a tactic which makes for compelling viewing from start to finish.

Just take a moment and really think about this following concept. One item the late, and eternally great Gene Siskel and Roger Ebert often mused about when critiquing films was if the characters on screen would be as or more interesting than if we happened to overhear the real actors having lunch in a restaurant. If the characters on screen are not as interesting, then you ultimately would have a very weak film on your hands. With that in mind, plus the plethora of downright horrible films featuring members from the "Saturday Night Live"/"SCTV" community, where the scripts and characters are completely non-existent, and the laughs are even less than that, it was downright genius to see how Rock completely sidestepped this particular film comedy fate which has almost become a standard.

Chris Rock has peppered his film with appearances from his friends and colleagues in the comedy community and allowed absolutely all of them to contribute to the wider canvas of the film as a whole. From Cedric The Entertainer's wild performance as a simultaneously hilarious and horrifying guide on Andre Allen's fateful comedy tour to a sequence set within Allen's ex-girlfriend's neighborhood home, which features no less than Sherri Shepherd, Leslie Jones, Michael Che, and the inimitable Tracey Morgan, those terrific sequences and others are all designed to deepen and broaden the character and life arc of Andre Allen, while also being funny.

Rock wisely allows his cast to just talk, talk and talk even more, revealing not only traits about themselves but the rich history that exists between themselves and Allen, thus making for moments that are painfully bittersweet as emotions of pride and resentment are forever intertwined. Rock explores the difficulties that occurs when one of your own just happens to "make it," as Allen and his companions all questions whether his success was ever truly deserved over anyone else within their circle. Rock accomplishes this feat without any hyperbolic scenes of prefabricated drama. Just through a simmering tension that lurks beneath the joyous ribbing. A particularly strong sequence with the legendary Ben Vereen is especially prickly and even the otherwise comical scenes between Allen and his close friend/"security and assistant" Silk (the effortless natural JB Smoove) contain a bubbling jealousy.

The heart of the film belongs entirely to the trepidacious and often contentious relationship between Allen and Chelsea, the journalist he does not fully trust due to the years of lacerations he has received from her newspaper. Here is where I thought "Top Five" belonged in the same neighborhood as Actor/Co-Writer/Director Steve Buscemi's "The Interview" (2007), his remake of the Dutch original in which he starred alongside Sienna Miller as a political journalist and soap opera star respectively, engaged in a night long battle of wills. Granted, "Top Five" is not nearly as acidic as that film, but Rock does indeed inject a sizable amount of professional, intellectual and sexual tension between his two leading characters by giving each of them sharp banter that augments their respective worldviews and the chemistry between Rock and Rosario Dawson was much more palpable than I thought would be possible.

With regards to the relationship between Andre Allen and Chelsea Brown, again I found myself mentally returning to Richard Linklater's priceless "Before" series (1995/2004/2013) but also to films like Director Stephen Frears' "High Fidelity" (2000), Writer/Director Theodore Witcher's underseen yet celebrated romantic drama "love jones" (1997) and even moreso, Writer/Director Sofia Coppola's "Lost In Translation" (2003). With all of those films, especially Coppola's, Chris Rock has given us two characters who are essentially lost souls who somehow find each other unexpectedly and at a most opportune time. For Allen and Chelsea, they completely exist within the fishbowl maelstrom of celebrity, fame, artistic and professional expectations combined with the commercial demands of both of their respective industries of film and print media, yet they both feel as if they have reached stages of treading water to survive. No matter their successes, both of their professions have nearly eaten them alive due to all of the compromises and concessions each of them have made over the years. This element allows Rock to delve even deeper than he ever needed to do for a film of this sort, thus making for a much richer experience.

First of all, both Allen and Chelsea both posses some shared demons, which delve profoundly and rightfully into issues of race and class as each of them represent a societal rarity: highly successful African-Americans, an existence which sets them apart from their own race as well as their White counterparts. While one plot twist (no spoilers) unearths some racial and gender realities about the longevity and influence of Chelsea's journalism career, I loved how Rock forces us to take a harder look at what it really means to be "lonely at the top."

Andre Allen may be a globally famous movie star but where are the Black executives and studio heads that could possibly support his wishes to branch outwards creatively instead of forever wishing him to exist inside of a bear suit? A quick sequence with Kevin Hart as an Ivy League educated executive who is continuously left out of important studio meetings with his White colleagues is blistering in its truth, for instance. In another sequence, systematic prejudices against Blacks are further exhibited during another sequence where Allen, recording a station identification jingle for a satellite station, is asked by a White DJ/Producer to put "a little more stank" into his delivery. Chris Rock showcases and educates throughout "Top Five" that the air Andre Allen and to an extent, Chelsea Brown, are able to breathe is of a distinctly rarefied quality, making them truly the only people that can honestly understand each other.

But then, there is the matter of addiction. Both Andre Allen and Chelsea Brown are recovering alcoholics, which also ties the two characters together. But on a larger platform Chris Rock's "Top Five" also exists in the same neighborhood as Woody Allen's dark comedy "Celebrity" (1998),  and even to a degree Director David Fincher's "The Social Network" (2010), Writer/Director Spike Jonze's "Her" (2013) and Writer/Director Kevin Smith's "Tusk" from this year, as Rock is indeed holding up a societal mirror to the audience in regards to our addictions to fame, celebrity culture and our continuous obsessions with figures who hold no discernible talent and have actually only contributed massively to our societal and spiritual decay. Wisely, Rock never utilizes a heavy hand as he is just so savvy and sly with the presentation that we may not realize just how stinging his commentary is until we ruminate over the film afterwards.

Chris Rock's "Top Five" is another welcome surprise in a cinematic year that really has been filled with surprises. Ribald, raucous, and richly resonant, Chris Rock has accomplished a motion picture feat that is as enlightened as it is jocular and decidedly raunchy. Even moreso, it was not nearly lost on me that this is the second film this year, after Writer/Director Justin Simien's audacious "Dear White People," that I have seen in which the film is driven by the motivations and actions of contemporary, articulate, verbose, intelligent individuals who happen to be African American. While it is a shame to have to point out this fact, I am more than thankful that both of these films have arrived at all, itself a minor miracle.

For fans of Chris Rock, "Top Five" will certainly fly right up your alley. For late and newcomers like myself, the film is a terrific surprise. For those who just want to see a good movie, you can easily add this one to your list of films to see.
Posted by Scott Collins at 3:57 PM